Founding of the Republican Party

On July 6, 1854, just after the anniversary of the nation, an anti-slavery state convention was held in Jackson, Michigan. The hot day forced the large crowd outside to a nearby oak grove. At this “Under the Oaks Convention” the first statewide candidates were selected for what would become the Republican Party.

United by desire to abolish slavery, it was in Jackson that the Platform of the Under the Oaks Convention read: “…we will cooperate and be known as REPUBLICANS…” Prior to July, smaller groups had gathered in intimate settings like the schoolhouse in Ripon, Wisconsin. However, the meeting in Jackson would be the first ever mass gathering of the Republican Party.

The name “Republican” was chosen, alluding to Thomas Jefferson’s Democratic-Republican Party and conveying a commitment to the inalienable rights of life, liberty, and the pursuit of happiness.

Though popularized in a Thomas Nast cartoon, the GOP’s elephant symbol originated during the 1860 campaign, as a symbol of Republican strength. Republicans envisioned “free soil, free speech, free labor.” Under the leadership of President Abraham Lincoln, the GOP became the Party of the Union as well.

President Lincoln issued the Emancipation Proclamation, but it was the entire Republican Party who freed the slaves. The 1864 Republican National Convention called for the abolition of slavery, and Congressional Republicans passed the 13th Amendment unanimously, with only a few Democrat votes.

The early women’s rights movement was solidly Republican, as it was a continuation of abolitionism. They were careful not to be overly partisan, but as did Susan B. Anthony, most suffragists favored the GOP. The 19th Amendment was written by a Republican senator and garnered greater support from Republicans than from Democrats.

Low taxes, sound money, regulatory restraint: these were among the commonsense economic policies established by the GOP that brought about decades of prosperity after the Civil War. Republicans encouraged innovation and rule of law. Buttressed by Republican control in Congress, the McKinley, Theodore Roosevelt and Taft administrations cleared away obstacles to economic growth.

President Dwight Eisenhower and congressional Republicans appreciated the fact that the private sector, not government, is the engine of wealth creation. With his bold tax-cutting agenda, President Ronald Reagan revived the economy after years of Democrat malaise.

Theodore Roosevelt embodies our Party’s traditional concern for the environment, but the Republican commitment to the environment actually goes back much further than that. For example, the world’s first national park, Yellowstone, was established during the Ulysses Grant administration.

Ronald Reagan explained the difference between Democrats and Republicans in a way that cannot be improved upon: “Two visions of the future, two fundamentally different ways of governing – their government of pessimism, fear, and limits, or ours of hope, confidence, and growth. Their government sees people only as members of groups. Ours serves all the people of America as individuals.

President George H.W. Bush championed community and volunteer organizations and the tremendous power they have for doing good. He famously described them as “a brilliant diversity spread like stars, like a thousand points of light in a broad and peaceful sky.”

In the first decade of the 21st century, President George W. Bush made an unprecedented commitment to helping those in need beyond our shores through the President’s Emergency Plan for AIDS Relief (PEPFAR), an aid program for countries devastated by HIV/AIDS. Since its inception, PEPFAR has saved over a million lives and currently provides over 5 million people with life-saving treatments.

President Reagan and President George H.W. Bush led western democracies to victory over Soviet tyranny in the Cold War. The George W. Bush administration maintained the military second-to-none and projected that power in the fight against international terrorism.

Party of the Future

Drawing inspiration from our Party’s history, today’s Republicans believe individuals, not government, make the best decisions; all people are entitled to equal rights; and decisions are best made close to home.

At the state level, the nation’s thirty Republican governors are making government more effective and efficient, spurring economic growth and striving to put more power in the hands of the people.

Nationally, Republicans recognize that the slow, bloated, top-down Washington bureaucracy is out-of-date in the 21st century. Our Party works to give Americans more choices—in healthcare, in education, in energy, and in the economy—and to free individuals and families from the intrusive overreach of federal bureaucrats.

The Party’s core principles of freedom and equal opportunity are as relevant today as at our founding, and they are the roadmap for American renewal in a new and interconnected world.

Party of Progress in Robeson County -

A January 23, 1953 Robesonian newspaper article related a story about local Republicans from Robeson County attending a dinner in Winston-Salem for President Eisenhower that year.  The Robeson delegation was referred to at the function as the "Phone Booth Boys" relating an incident written about in the local paper at the time regarding the size of the Robeson County Republican Party in the 1950's.

It seems a couple of years earlier, around 1950, local Republicans sought use of the County Courthouse to hold their county Republican Convention.  As a joke, the county manager at the time was W.D. Reynolds and reportedly offered the phone booth at the court house feeling it was big enough for the expected attendance.

The Goldwater campaign of 1964 began to excite local Republicans.  Burt Benson (former local Chairman) along with his wife Jan and Tom Keith (another former local chairman) hung a Goldwater for President Banner across Chestnut St. in Lumberton under the cover of darkness during the election.

Robeson County Republican Party Chair and local attorney Fred Musselwhite was quoted in a September 18, 1973 article in the Robesonian newspaper that the local GOP would become a "viable force" in county affairs.

From the time of the formation of the Republican Party before the Civil War through the 1980's, Robeson County maintained Democratic registration at well over 90%.  Even President Reagan could not win Robeson during his landslide wins in the 1980's. Democrats maintained a firm grip on local politics.

Even when Robeson was over 90% Democrat, many Democrats were conservative voters.  In 1994, Ernie Brown was the local Republican Chairman and Republican James Sanderson challenged the Sheriff's seat losing by only 4,000 votes out of a historic 33,000 votes cast.  Republicans were alway able to win many seats in state and federal races in many precincts, but it was the earliest evidence of a slowly turning tide. During the late 1990's, Native American Republican Bob Brewington became the local GOP chairman.

In the early 1960's, a reporter had asked a local Democratic leader if a Republican would ever be elected in Robeson.  His response was that it would be a cold day in Hades if a Republican was ever elected in Robeson.  After the 2010 election of Pridgen, his local swearing in ceremony had to be cancelled due to an unusual county blizzard that blanketed the county in snow that day.

After re-districting Pridgen later lost a bid for re-election in 2012.

Edge continues to serve on the Board of Commissioners after winning re-election in 2014.

Also in 2014, Randy Hammonds made a bid for Sheriff as the first Republican to challenge the Sheriff's seat in 20 years and a rare bid for a countywide seat by a Republican.  Hammonds won 7 precincts and tied in an 8th precinct out of 39 during a time that Democratic registration was still 70%.  Hammonds also won many precincts that had never been won by Republicans in Robeson and helped push those precincts over for other Republican candidates such as Senator Thom Tillis (R).

In a county President Obama won twice - Robeson county was one of only a few counties in the nation that flipped dramatically for President Trump in 2016. Trump & most of the top ticket candidates including Senator Britt won 28 out of Robeson's 39 Precincts. Trump was the first President to carry Robeson county since Nixon in 1972.  Even Reagan failed to win Robeson during his landslides.  Robeson was featured in national news stories as a result and continues to now be watched by national pundits.

At the 2017 State Convention, the NCGOP awarded Robeson County GOP Chairman Phillip Stephens the Robert Rector Award for Most Outstanding Party Chairman in the State.  Stephens dedicated the award to rural counties in the state where Republicans have long been the underdog.

The Robeson County Republican Party has become a viable force in county affairs.

President Donald Trump held a rally in Robeson just before the election becoming the first sitting President to visit Robeson in modern times.

President Trump won Robeson with 58.93% of the vote.

Party Chairman Phillip Stephens publishes the book, "Winning Elections: Behind Enemy Lines with the GOP" on Sept 1 & is interviewed for a UK SKY News documentary. He is chosen as an alternate delegate to the Republican National Convention.

Former State Legislator G.L. Pridgen becomes Chairman & Stephens moves to Vice Chair for the next cycle having served as chair since 2008.

Democrat Registration is now 53% in Robeson. 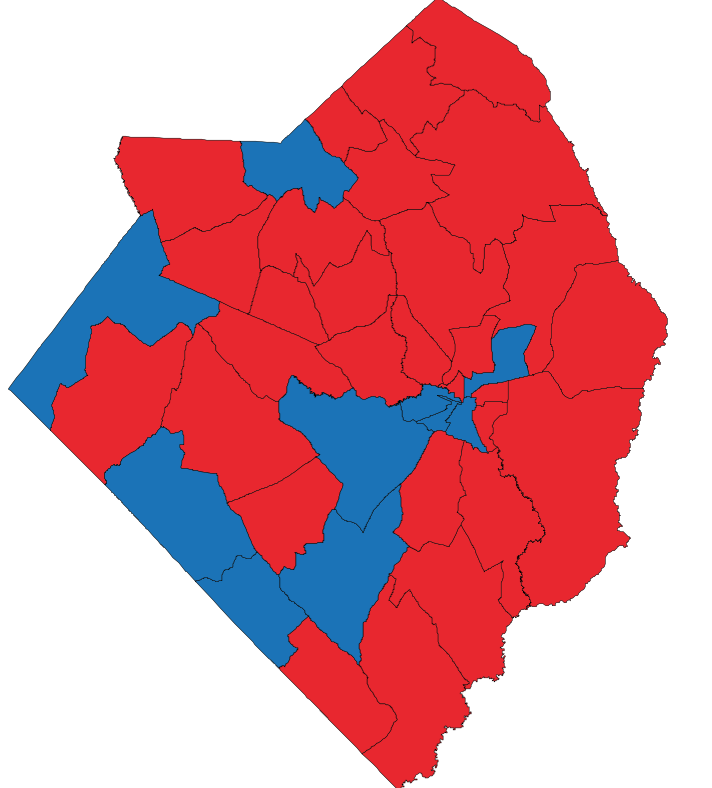 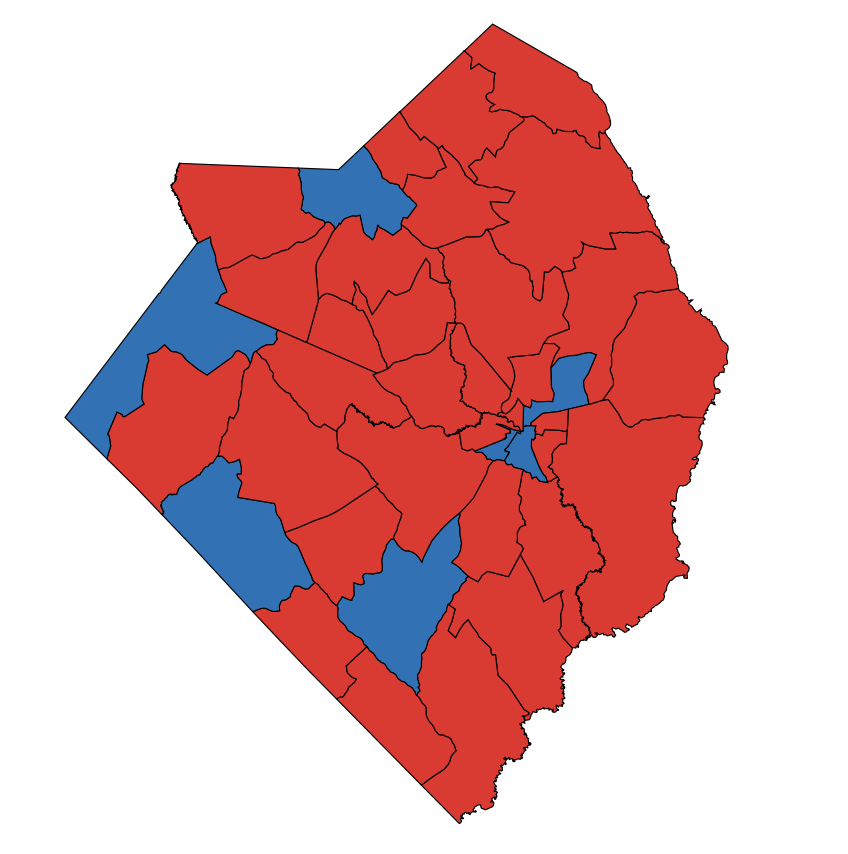 Join the fight to keep Republicans elected in Robeson County

Help our Party fund our success